@joahnginsberg @fauchiertaylor
an average day with charley. 🧡
— 40% of #disabled women will be sexually assaulted in their lifetimes
Disabled people face barriers in healthcare— including basic preventive care & screenings. This is how it happens.
❤️
Easter candy is the pinnacle of all holiday candy.
charley always calls shotgun.
my heart is full. ❤️
#Spinraza No. 19 is complete! 💉🧬 Big thanks to @stanfordneuromuscular ❤️
#gingercatsofinstagram
“I have said this many times, that there seems to be enough room in the world for mediocre men, but not for mediocre women, and we really have to work very, very hard.” #MadeleineAlbright 1937-2022
happy monday. 🐱

I’m nearly two years into my Spinraza journey, so you’d think I’d be relaxed about the entire process. That I would have a ‘been-there-done-that’ attitude about the spinal injections, and the subsequent physical and respiratory evaluations that follow. That I’d be that chill kid that doesn’t get emotionally twisted into knots at the sight of the familiar 500g weight… or the large plastic mouthpiece that gets shoved under their lips to test their pulmonary capacities. That my vast experience would allow me to stay cool under these pressures. You know, like Robert Mueller when faced with a nation that can’t seem to read a 448 page document that they forced him to write in the first place?

But, no, I’m decidedly not that unshakable.

I had my 9th Spinraza injection several weeks ago, after recovering from a nasty bout of influenza. This illness took its toll, and I was worried about the effect it could have on the physical and respiratory assessment results to follow. So, in the days leading up to my assessment, I began to physically and emotionally prepare for the grueling day of tests. I doubled-up on my physical therapy. I increased my protein intake. And, most importantly, I talked to my counselor about breathing exercises to try to keep me from slipping into ‘lizard brain’ during the stressful moments of the day.

If you aren’t familiar with ‘lizard brain,’ please know that I’m not making this concept up. It’s not about a colony of salamanders on Animal Planet. Rather, the term refers to a frenzied state of mind that can occur when extreme stress causes all reasonable thought to vanish— and you are left with the instinctual urge to fight, or run away. This part of our brains is very elemental. Prehistoric. And it traces back into the beginnings of life. The ‘lizard brain’ hibernates inside all of us— but, if you are Donald Trump, it’s activated 87% of the time.

I am a naturally competitive person. As I’ve discussed on this blog, I often push myself to my limit. I want the A on the test. I want the gold star. I want to be able to say that I tried my damned best. When my ‘lizard brain’ is activated, my instinct is to fight. Generally speaking, this drive is a good thing. On these physical and respiratory assessments, it means that I give a lot of effort. If my brain calculates that there’s a 51% chance that I can lift that 500g weight, I have a hard time letting that task go. I want those points. I want to see them write it down on their damn little clipboard. My lizard brain can go from ‘off’ to ‘on’ in that exact moment. And it won’t back down until I’m red-faced, shaking— forcing the physical therapist to pry the 500g weight from my sweaty fingertips.

This isn’t necessarily a good thing. A reasonable, normal brain would realize that I shouldn’t waste energy that I will need for the rest of the assessment. But, ‘lizard brain’ makes unwise decisions. It does stuff that’s just not rational. This is why someone needs to remove the Twitter app from the president’s phone.

At Stanford this week, I really tried to keep that part of my brain contained. I came into evaluation day prepared. I was going to be focused. Methodical. I was energized— and ready. The lizard was going to be On. A. Leash.

I ate a good breakfast. My friend, Edith, brought me a Toffee Nut Latte from Starbucks to sip on the drive over to Stanford. It was a size grande. This is an important detail because I generally only order a size tall at Starbucks because my naturally high-strung personality can only handle so many shots of espresso. (This fact will become important as this story moves forward).

About halfway to Stanford Neuroscience, I got the sudden urge to listen to rap music. I never, ever listen to rap music because my taste in music tends to be more similar to a 92-year-old Jewish man than the Millennial hipster that I actually am. But, it felt like I needed to hear that music in that moment. As I started belting out the lyrics to Petey Pablo’s Freek-A-Leek, Edith grew concerned:

“How much of that latte have you drank?”

“Uhm, only like a third of it so far. But, I feel really good about how this day is going to go.”

The music continued. As we approached the bridge into Palo Alto, I started counting overpriced Tesla cars that I’d see on the freeway. They were easy to spot with the pretentious ‘T’ on their trunk. I briefly pondered if the company’s founder Elon Musk liked rap music. Then, I remembered that I needed to worry about my lizard brain, so I did a few breathing exercises and counted fourteen more Teslas. Then, I felt a hot flush run through me:

“Ooo, can you open the window? I want to feel the bay’s cool air on my face on the bridge.”

“Did you finish your drink?”

“Nope. Only half so far. But, it’s really yummy. The Toffee Nut Latte is almost as good as the Chestnut Praline Latte. You know, it’s probably not as good because instead of two nuts in it, it only has one nut. Like Lance Armstrong.”

We parked in the garage, and as the cool air hit my skin, I realized that, for some reason, I was already sweating.

“I should have got you a decaf.”

“Look, my undershirt is stuck to me.”

After checking in to the reception area and drinking some water to hydrate, I waved at my doctor’s nurse practitioner across the foyer. When she came over and hugged me hello, I hoped she couldn’t smell my sweaty and toffee-nutted body.

I was taken back into the exam room and my vitals were taken. When my blood pressure was within the normal range, I was shocked. Seriously surprised. So, my lizard brain decided that it was a good idea for me to drink the rest of my latte.

The respiratory therapist came in a did a full pulmonary function test. Right away, I could tell that all my hard work during my influenza recovery, and afterward, was paying off. The Spinraza was doing its job. The numbers with each respiratory test were coming in higher than before. I was on a respiratory and caffeine high. My lizard brain was secretly tweeting:

“This is the most huge thing ever. I’m the best pulmonary test-taker in history.”

After I caught my breath from those tests, I finished my latte. As my straw was slurping the last toffee bits on the bottom of the cup, the physical therapist came in for the physical assessment tests. With the caffeine pumping in my blood, I felt especially focused. All the world fell away until it was just me and that test. I watched her hand making notations on her clipboard. I started to mentally tabulate points like a card-counter at a blackjack table in Vegas. I was going to bust the dealer. She was the dealer. I would not be stupid enough to take the bust card.

“If I lift this cup this way, will I get more points?”

“I know I only get three tries to do the task successfully and get my points. But, if I don’t set the item down, it still counts as one try, right?”

I don’t know if the caffeine was doing it, or all the preparation I had done, but I felt a zing of excitement as, one by one, the tasks came easier than I had expected. My mental tally was telling me that my score was higher than last assessment. And the therapist agreed:

“You’re doing really well. I think you’re ready to try an additional task we haven’t done before: putting you on the end of a table to see if you can sit upright all on your own. Without any support.”

“Will I get more points for that?”

I’d like to report that I did get those points. I did sit on the edge of that table all on my own. First, I did it bracing on my own hands. Then, I did it without the support of my hands for even more extra bonus points. It was an amazing moment. Edith even cried a little because it’s a task we’d never thought I’d be able to do.

I’d like to say that this achievement was emotional for me in that moment, too. That this milestone was the culmination of two years of treatment that paid off in a tearful crescendo.

But, it didn’t happen in that way. And you know why it didn’t? Because my lizard brain was too busy shouting:

“GIVE ME ALL THE POINTS!”

It was still all worth it, though. 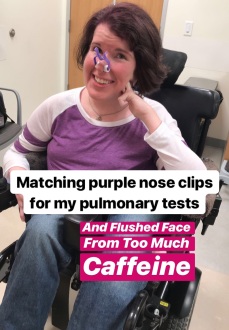