Getting sick when you have SMA is not a fun experience, as I’ve discussed previously on numerous occasions. The tiniest cold can turn our lungs into a swamp of mucus, and recovering from, even such a minor illness, can take longer than a steamship voyage across the Atlantic. And that’s assuming there are no icebergs lurking in the water that could sink the ship— or, worse, yet, send us to the hospital for IV antibiotics. It’s a dangerous ocean out there, even without German U-Boat torpedoes.

So, it’s easy to imagine that if the illness is more than a cold— things can become serious very quickly. Recently, I was threatened with such an iceberg. A Titanic-sinking hunk of Influenza— the most dreaded of respiratory viruses. The little bastard that attacks during the night, overwhelms your defenses, and turns Leonardo DiCaprio into a blue icicle.

As soon as it hit, I knew exactly what it was— and the danger it posed to me. I had prepared for this moment, and didn’t take it lightly. Keeping my lungs clear was my top priority. I would sacrifice sleep and rest (the two things most needed when you are ill), just to keep those airways pliable and open. I would do anything to get the mucus out. Literally anything.

So, I leapt into action. I pulled out all my respiratory devices. CoughAssist. BiPAP. Nebulizer. And I started my emergency influenza protocols. Tamiflu. Zithromax. Prednisone. Albuterol. I had trained well for this moment. I was like those Paris firefighters that protected the Notre-Dame Cathedral. I was not going to let the whole structure fall apart.  Sure, I knew my roof was made of really old wood covered in medieval pigeon shit. That just meant I was going to have to work extra hard to save the good bits of the building. But, it was definitely worth saving. If cranky French revolutionaries couldn’t defeat me in 1789, I wasn’t going to let a fire do it. Mon Dieu!

The following days passed in an exhausting whirlwind of respiratory care. Given the complexity of SMA, we can most often receive better care at home than in the hospital. You might find this surprising, but most local medical professionals have little to zero experience with a patient with a rare neuromuscular disability, like SMA. So, hospitals can be very dangerous for us. We have learned this the hard way. So, we have to become our own advocates and our own resources. And our doctors become our partners and colleagues… we teach them sometimes more than they can teach us.

It wasn’t long before my bedroom began to resemble a respiratory care unit. And I personally resembled the little green Mucinex monster from the commercials on TV. I was green, gross and contagious. Frankly, I was my own worst nightmare.

And, I was exhausted. Coughing and keeping my lungs clear became a full-time job. The kind of job with lots of overtime and no weekends off. The really, really sucky kind. In fact, I was so exhausted that I took to blending my food so that I wouldn’t have to waste energy eating and chewing. Every ounce of my strength was devoted to respiratory care and I needed to maintain the nutrition and calories to do it. Yes, I really was that committed. And, yes, blended food actually tastes exactly the same as non-blended food. For example, a blended Chile Relleno still tastes exactly like a non-blended Chile Relleno. (Unfortunately, it does look like baby poop, though.)

As my efforts slowly yielded positive results, this didn’t stop the mental toll from weighing heavily on me. The anguishing rotating schedule of BiPAP, CoughAssist and Nebulizer— in between drinking my meals and trying to rest— was relentless. There wasn’t even much time for Netflix, which says a lot because I can always find time for Netflix.

Emotionally, I struggled. I cried, even (which wasn’t wise because it made me even more snotty and gross). I had nightmares about really scary things. Like going to the hospital… being put on a breathing tracheotomy that took away my ability to speak… and, worst of all, Donald Trump tweeting even more than he already does.

After two weeks, I began to see the light. I could go stretches of time without coughing. My doctor noted that my lungs were improving. I was eating solid food again. I stopped dreaming that Robert Mueller was kidnapped by Boris and Natasha.

Things were looking up.

And then, last week, I made it to Stanford to receive my 9th injection of Spinraza. It was just the boost that I needed. A physical boost, but perhaps even more importantly, an emotional win.

In the days since, I feel my strength slowly returning. It will take time for me to get back to my pre-iceberg self, but I just need to be patient.

(PS: If you need to find me, I’ll probably be watching Netflix.) 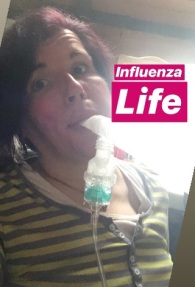