All rights reserved. No part of this website may be reproduced or transmitted, in any form, without permission. In other words, if you steal my stuff, I’m going to get pissed off, call my lawyer and run you over with my wheelchair.
© Elizabette Guéçamburu, 2021

🧡
@richardbranson — we #disabled folks just want to fly safely on your airplanes in our #wheelchairs … if you can make a ship to travel to fucking SPACE, can’t you make your regular planes more #accessible to countless people like me? @virginatlantic @virgingalactic
🐾🧡🐾
If you want to #FreeBritney it’s time to talk about #Ableism. After all, conservatorships are simply *one* of the MANY tools of oppression & control utilized against #disabled people every single day.
Big thanks to @nmdunited for hosting a fun karaoke night! 🍸🍹🎤🎼 (Please give @nmdunited a follow to learn more about this fabulous peer-led organization that supports adults with neuromuscular disabilities!)
Thanks for the 14 years, Lucky. What a dog. 💔
check out my newest post: “cicada hordes & lots of spicy nuggets” (link in bio) ❤️ #disability #spinalmuscularatrophy #spinraza
✅ Get #Spinraza Intrathecal Injection
✅ Clean Out Closet
grateful for zoom & books. ❤️📚
A birthday girl stopped by today to say hello. 🎈🦄 #goddaughter
Aside from medical appts, today was the 1st time in a year that I went inside a place that wasn’t my own home. While I’m relieved, the trauma is still real. Please #GetVaccinated so your #HighRiskCOVID19 friends & family are safe venturing out into the world with you again.

I’m probably one of the last people you’d expect to be a obsessed with Prince Harry & Meghan Markle’s royal wedding— or, really, any royal wedding. But, alas, I am. I’ve been counting down the days to this event the same way a nine-year-old does before summer vacation. I am EXCITED. Let me clarify that further— I am SUPER FUCKING EXCITED.

It is important to note that I’m generally not known to be a person that lacks enthusiasm in my everyday life. Quite to the contrary— my obsessive nature means that if you were to compare my enthusiasm level to Homeland Security’s color-coded terror alert level, I’ll always come in as at least ‘elevated’ — if not higher. I’m like an al-Qaeda terror attack just waiting to happen.

But, there are times when my excitement hits an abnormally high level. Moments when my palms get sweaty and my heart actually races. And, with this royal wedding, that’s definitely happening right now. This is an extraordinary achievement, because usually I only hit this level of anticipation under these kinds of circumstances:

• I’m drinking my first pumpkin spice latte of the year.

• I unexpectedly see a photo of Henry Cavill online.

• I’m watching the Opening Ceremonies of the Olympic Games on TV.

• I get to write a joke about a dictator (preferably Vladimir Putin or Kim Jong Un).

As these scenarios are quite specific, this finger-tingling level of joy is fleeting and rare. But, this time, Harry and Meghan have delivered big time. They’ve dished me up a giant helping of YAAAAAAAY!

I’m totally committed to this event. I’m reading all the news articles about the wedding, following all The Royal Family’s social media accounts, and watching all the TV specials. It’s been great. While I had a similar attachment to Prince William’s wedding to Kate, Meghan’s Americanness makes this especially exciting. Plus, it’s fun to watch the priggish British press freak out about a bi-racial American divorcée marrying their beloved Harry. It makes me want to stand up and cheer. (If I could actually stand up, that is.)

All that said… intellectually, I am not a fan of the concept of a monarchy. I don’t like the notion that a person can be born into a position that, supposedly, makes them better than an entire nation full of people. It’s dumb. And archaic. It’s why America fought a revolution and why France invented the guillotine.

The monarchy shouldn’t exist in a modern world. It really, really shouldn’t.

The fact that it does exist means that I’m going to soak up the ridiculous, messy spectacle that it is. Like a labrador retriever licking a spoon of peanut butter until it’s completely gone.

So, in the hours leading up to the royal wedding, I’ve got everything planned. Here are the pertinent details:

•   My DVR is set for 2am California Time. While I’m super stoked about the whole thing, I’m not deranged enough to wake up that early on a Saturday morning to watch it live. I’m obsessive, but not fucking stupid. Also, I have my DVR set to two different channels in case one network has a technical disaster. Imagine if, as Meghan is about to step out of the car in her dress, a fucking NBC antenna tower falls on top of a royal horse? Signal lost. Feed lost. I would be majorly pissed.

• I’ve got English Breakfast Tea. The jury is still out on if I will actually drink this on Saturday morning, though. I’m generally a coffee girl (as I’ve mentioned previously), but I might give it a go for the tradition of it all… plus, the tea bag has a pretty label.

• Curried Egg Salad is on the menu. I’m making mini tea sandwiches to eat on Saturday morning, too. I’m doing curried egg salad, which is the most ridiculously British type of sandwich I could dream up. (I forgot to buy a cucumber at the store. #fail) It’s important to note that I’ve never eaten curried egg salad before. So, it might be total shit. This is highly possible because British food generally blows.

• I will be doing none of these things while wearing a hat. I don’t care if hats are required at British royal weddings. I’m not wearing one. Frankly, I don’t need to wear something that will make my head look any bigger than it already is. 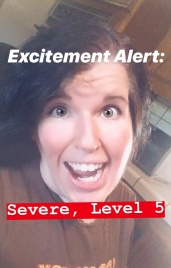 3 thoughts on “Curried Egg Salad… And A Royal Wedding Countdown”