All rights reserved. No part of this website may be reproduced or transmitted, in any form, without permission. In other words, if you steal my stuff, I’m going to get pissed off, call my lawyer and run you over with my wheelchair.
© Elizabette Guéçamburu, 2023

So excited. Stay tuned for publication updates in the coming days… ❤️
thankful for 2022. hopeful for joy, health & peace in 2023.
stay cozy this christmas. 🎄❤️
cookie day with the best baking assistant around. ❤️🎄
If some guy gives you 184 birds for Christmas, he’s not your true love. He’s Ted Bundy.
yesterday, i spoke at the @stanfordneuromuscular conference about living with #spinalmuscularatrophy. it was a cold, rainy day, but i got this faculty name tag that i will use to impress people for years to come.
today was a win for #inclusivity — thanks to #Biogen for bringing #disabled faces & perspectives into the world of wellness and health. #physicaltherapy #spinalmuscularatrophy #exercises
I bundled up for my pre-#Spinraza bloodwork this morning. My #spinalmuscularatrophy veins are tiny, so the extra layers & a tiny heat packet on my forearm keep them from shrinking any further. (It’s an added bonus that I look like the kid from Who-ville. ❄️💦)
Mic drop. Thanks for the new tee @anderetxu43 🧡
trick-or-treat 2022. 🎃👻❤️
happy halloween from my favorite wizard. 🎃👻🧡
Yesterday, I had a full battery of physical & respiratory tests. It was a looooong day, but everything seems stable from my previous assessment. 🧬📊😀 A shout-out to the great team at @stanfordneuromuscular for all their efforts. ❤️

Some Mondays can exist on their own cosmic plane. An alternate reality where weird stuff happens more frequently than other days of the week. It’s a day for hangovers, short tempers, and trying to get all the things done that you should have done over the weekend — if you hadn’t been rewatching the latest season of The Crown while still wearing your pajamas. By the way, Princess Margaret would have definitely approved of pajama-wearing after 2pm. Her sister, the Queen, however? Not so much.

Earlier this week, I had one of those Mondays. It was the day of my 6th injection of Spinraza and I went into it primed, pumped, and ready. But, the signs presented fairly early on that day that things were gonna be just a little bit weird— like a Kanye West interview.

The drive to Stanford is always arduous— and traffic-ridden. With the number of cars and trucks that are trying to push through the freeways from the Central Valley to the Bay Area, it’s like trying to pass a rump roast through a shower drain.

It always amazes me that so many folks make this long commute on a daily basis. It boggles my mind. I’d have a serious mental breakdown if I had to do that. The kind that would make me unable to enjoy the mythical 4,000 square-foot suburban house that I could maybe afford, but never have time to live in.

On this particular Monday, the traffic, surprisingly, wasn’t too bad— meaning that it was only moderately heinous. You know, like rice cakes or gender reveal parties for unborn babies. It was tolerable, but not something you’d voluntarily go out and do.

Anyway, despite the flowing traffic, the mood of the drivers was decidedly grim. And, frequently, downright hostile. Dozens of horns were honked. Many cars were aggressively passed. And a slew of motorcycles were cutting off cars at each opportunity. There was more tension on that freeway than in the last episode of The Bachelor.

A case of the Mondays was in full-form.

We arrived to the Neuroscience building earlier than expected (shockingly!!), and the nurses took me back to the room to prepare for my lumbar puncture. It wasn’t long before one of the doctors came to go over the last details of the procedure. Given that Stanford is a teaching facility, they work in pairs— an attending (teacher) with a fellow (student). There’s also no way of knowing which doctors will be on duty on a particular day, either.

Having a lumbar puncture is always a tricky business, but when you have complex anatomy, like me, it’s even more precise. I lay on my side and they use a fluoroscopy machine (like an x-ray) to monitor their progress as they move the five-inch needle around my spinal rods and into the small space in my vertebrae to access my spinal fluid— where the Spinraza must be injected. It’s like a playing a game of darts in a really sterile bar— only the target is me, and I’m awake and not a cork board.

Given this complexity, there are lots of factors that can determine how quickly and easily the procedure will go. The experience of the doctor. My position on the table. And, frankly, a good amount of luck.

The fellow (student) worked the needle into position in my spine and all seemed okay… but, the spinal fluid wouldn’t drip out the needle (how you verify that you are actually in the right spot).

Remember when we talked about the Mondays? Yeah, well, it wasn’t finished with me, yet.

The fellow readjusted the needle, back and forth. In and out. Making small centimeter-sized adjustments to try to yield the spinal fluid. But, it WOULDN’T FUCKING COME OUT.

Meanwhile, with each move of the needle, tiny nerve pains were boomeranging around my back and hip. They even tried tilting the table so that gravity might help the fluid to dribble out.

But, no, it didn’t work. Isaac Newton’s Law of Gravity was a piece of shit. I don’t care what they teach us in physics class— it doesn’t always work. Especially in the alternate reality that is a Monday.

After this went on for a while, the attending doctor (the teacher), pushed aside the fellow (the student) and proceeded to give it a go himself. Frankly, if Isaac Newton had been in the procedure room in that moment, the attending doctor might have kicked him in his 17th century balls. A few minutes later, though, he was finally able to get it done. Gravity be damned.

I was so relieved. And so were the sore muscles in my shoulder, and the nerves in my hip and back. I daresay even both doctors were relieved.

About an hour later, I was back in my wheelchair and ready to load up in the car for the ride home. Just as we were opening the doors to my van, another vehicle with a disabled placard began aggressively revving their engine behind us, trying to hurry us into leaving the parking spot so they could take it themselves. It reminded me of all those angry folks on the road from earlier in the morning.

Then, a few seconds later, the driver rudely waved at us— as if hand gestures were like spells from Harry Potter that could magically make me load up into my van, strap me (and my wheelchair) securely inside, all in five seconds.

My friend, Edith, that had accompanied me on the trip, raised an eyebrow as I drove my wheelchair up my van’s ramp, “I think we need to make this car-loading-up thing take much longer than usual. What do you think?” 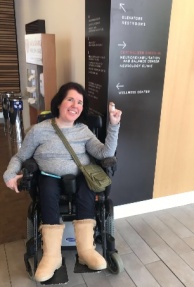 4 thoughts on “Mondays, Angry Drivers & Getting to #6”