charley is my ghostwriter. 🧡
So you say you oppose abortion because you want to “save disabled babies.” Where have you been in the fight for services/laws to support #disabled babies after they are born… and into adulthood??
🧡
Guns aren’t easy to get outside the USA. But, mental illness (& “broken families”/“video games”/“atheism”) does exist all over the world. But, those dudes just can’t go buy an AR-15 whenever the mood strikes them.
It takes 12-18 months to jump through all the hoops to get a power wheelchair.
summer heat. ☀️
@joahnginsberg @fauchiertaylor
an average day with charley. 🧡
— 40% of #disabled women will be sexually assaulted in their lifetimes
Disabled people face barriers in healthcare— including basic preventive care & screenings. This is how it happens.
❤️
Easter candy is the pinnacle of all holiday candy. 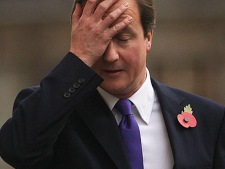 On this day, 50 years ago, a baby boy named David William Donald Cameron was born to somewhat posh parents in a somewhat posh part of London, England. Baby David would grow up to serve as Prime Minister of the United Kingdom from 2010 until this July. In order to secure his political future and the future of his political party, the Conservatives, Mr. Cameron had the grand idea of allowing the British people to vote on whether to remain as a member of the European Union (EU). This brilliant plan was supposed to appease the discontented white folks that hated EU immigrants, distrusted a globalized economy, and wanted to go back to the good ol’ days when the British Empire controlled most of the planet. Ahh, those were the days. Nothing like the smell of brewed tea & biscuits served by assorted caramel-colored servants to make middle-aged white folks feel better about themselves.

Anyway, Cameron’s “Brexit” referendum ended up biting him in his posh ass when the British people actually voted favor of leaving the EU. *gasp* Chaos, confusion and tears ensued— and not all of them were from Mr. Cameron.

Instead of staying to clean up the mess he made, David decided to resign as Prime Minister, paving the way for Theresa May to become the new PM. Frankly, it’s not surprising— men throughout history have been making messes that women are forced to clean up.

Nonetheless, I wish you a very Happy 50th Birthday, Mr. Cameron. Good luck to you… I think you may need it…