charley is my ghostwriter. 🧡
So you say you oppose abortion because you want to “save disabled babies.” Where have you been in the fight for services/laws to support #disabled babies after they are born… and into adulthood??
🧡
Guns aren’t easy to get outside the USA. But, mental illness (& “broken families”/“video games”/“atheism”) does exist all over the world. But, those dudes just can’t go buy an AR-15 whenever the mood strikes them.
It takes 12-18 months to jump through all the hoops to get a power wheelchair.
summer heat. ☀️
@joahnginsberg @fauchiertaylor
an average day with charley. 🧡
— 40% of #disabled women will be sexually assaulted in their lifetimes
Disabled people face barriers in healthcare— including basic preventive care & screenings. This is how it happens.
❤️
Easter candy is the pinnacle of all holiday candy.

Around three weeks ago, I was in a store and holiday music was already playing. Even though I snorted in disgust at the prematurity of it all, that didn’t stop me from admiring a collection of miniature Christmas trees roughly the size of Kevin Hart. You’ll be happy to note that I didn’t buy one, but I seriously considered it.

That set my mind into motion— into thinking about the holidays and when I’d put up my own decorations this year. I always tell myself that I’m going to wait until after Thanksgiving, but that never seems to happen. It’s more what I tell other people if they ask me when I put up my Christmas decorations. I always chirp, “Oh, I wait until after Thanksgiving.” But, in reality, I’m secretly hunkering down in my house around November 15th with empty nutcracker boxes strewn all over my dining room table and a rim of peppermint mocha residue around my lips.

It’s one of those secrets that we all keep and then lie to others about. You know, like how many times a day we floss (which is never), how many times a week we empty the lint compartment in the dryer (which is not enough) and if we wash our hands after we blow our nose (which should be all the time, but never is!).

When you are disabled, like me, you have to rely on others to help you put up your Christmas tree. You have to cajole and charm someone into climbing into the recesses of your garage to pull out the 7.5 foot plastic tree crammed in a cardboard box large enough for Kim Jong Un to stuff at least two dead bodies.

I’ve had the same artificial tree for quite a few years now. I don’t like having a real tree. It’s too much commitment. I have a hard enough time remembering to water my two houseplants, I definitely don’t have time to attend to a needy spruce tree. Plus, I don’t want something that will drop needles and crap all over my living room floor. If I wanted that, I’d just borrow a toddler.

Each year, there’s always a big moment of dread right before turning on the Christmas tree lights for the first time. That sinking feeling of wondering if this will be the year that it finally takes a giant poop. I’m sure I don’t need to describe this feeling any further. After all, if you’re a San Francisco 49ers fan, you feel this nearly every week.

Anyway, the last couple of seasons, my tree had begun to show its age. The lights began to dim, and large segments of the tree would randomly go dark, only to perk up again hours later. So, this week, I decided to take the plunge and get a new one. My new tree seems okay so far, but the branches were so smashed from being in the box on the long journey from China that the branches required considerable fluffing to stop them from resembling large marijuana joints. I suppose that’s one benefit to real trees, though— they are already fluffy.

However you may spend this holiday weekend, have a safe and happy one. If you need me, I’ll be here fluffing my tree, consuming large quantities of stuffing, and canoodling with my nutcrackers. 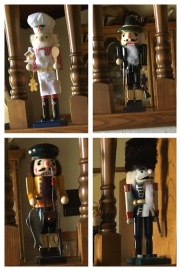