All rights reserved. No part of this website may be reproduced or transmitted, in any form, without permission. In other words, if you steal my stuff, I’m going to get pissed off, call my lawyer and run you over with my wheelchair.
© Elizabette Guéçamburu, 2021

thought it might be wise to downsize the tree this year. don’t want charley to turn amatxi yvonne’s old glass ornaments into glittering chards of death. 🎄❤️🐱 (he’s still not making any promises, though.) #kittenlife
happy thanksgiving from me & charley. 🍂🍁🧡
@cvshealth claims to care about the disability community but plans to argue to the Supreme Court that disability rights should be gutted. If they succeed, laws that prohibit disability discrimination won’t even cover discrimination that is supposedly unintentional. #Protect504 #disabilityrightsarecivilrights
halloween 2021 🎃
happy halloween! 🎃👻
feeling grateful to hit 40 & thankful to all those that made the day special. ❤️
Reunion! ❤️
Tests. So many tests.
While 90% of my brain is convinced that poor Gabby Petito’s body is dumped somewhere in Utah, the other 10% of me is wondering if this is just an elaborate scam.
A day at @stanfordneuromuscular ❤️💉 #spinalmuscularatrophy #spinraza #disability
Friends. ❤️ So great to see these wonderful ladies after such a long time. 😍

Tearing a folded piece of paper is not something that most people put much thought into. In fact, folks probably do it all the time without thinking of the physical effort that such a motion takes. Especially if it’s thick computer paper— the fancy kind that you can only buy at an office store. The tangible, professional-grade that big banks, mega-corporations and white-collar criminals use right before fucking over a bunch of middle-class homeowners. Or stealing the identities of poor old people that don’t know that Windows isn’t just something that you cover with drapes.

For those of us with SMA, tearing a folded piece of paper may actually be hard… if not impossible. Prior to beginning my Spinraza treatments, it was a task that I had not been able to do in a very long time. Not even the thinner type of paper that you buy at the dollar store. The kind they sell next to the cheap neon highlighters that smell like meth.

But, this ability is tested during the very-important PT assessments that measure my progress with Spinraza. While it seems an odd thing to test, it’s actually a good measure of hand strength and changes in grip. I’ve had two assessments so far, and I could not complete this particular task on either try— which royally pissed me off. As I’ve demonstrated before, I’m not the kind of person that does well with failure. If there’s an exam, I had better get an A. And if I don’t, I will not be happy about it and I will work myself into a damn tizzy to score better the next time. If you know me at all, you’ll understand that this is not an exaggeration. In fact, you’ve probably also worried that at some point I’m going to give myself an ulcer.

Next month, I will undergo another full PT assessment, which means that I will be confronted with that piece of paper. And, I really don’t want to fail that task once again. I don’t want to be a sad loser like the Mets or Hillary Clinton. So, yesterday, I began to practice this task. Fiendishly. Surprisingly, after about seven minutes, I achieved victory. I tore that damned piece of paper in half. And then, about twelve minutes later, I did it again. I was so happy that it didn’t seem to matter that I was sweating through my Secret Powder Fresh deodorant.

Today, in the time it took to watch two episodes of Comedians in Cars Getting Coffee, I tore a piece of paper FIVE FUCKING TIMES. If you don’t believe me, here’s a picture of the paper: 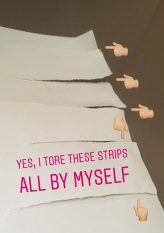 If you’re wondering how long it actually took me in real-time (not Netflix-time), it was about 30 minutes. So, roughly six minutes per tear in the paper. Although, I did two of the tears in less than 30 seconds— which, interestingly enough, is the same duration of President Trump’s attention-span.

I’ve got several more weeks to prepare for my next assessment, so wish me luck. Maybe, if I keep at it, I will no longer be the world’s slowest confetti-maker.

A girl can dream…

5 thoughts on “The World’s Slowest Confetti-Maker”